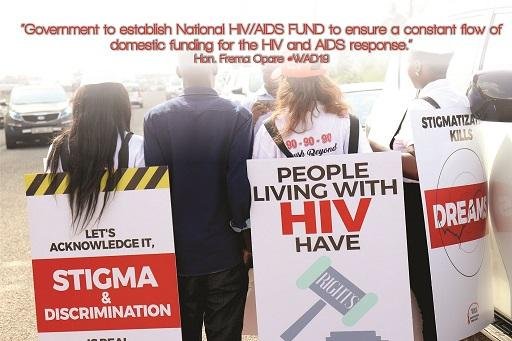 Hon. Akosua Frema Osei-Opare (Chief of State at the Presidency) in her opening statement mentioned that “Government recognizes the widening funding gaps in HIV program and co-financing obligation and has made adequate provisions for the fight against HIV/AIDS in the 2020 Budget.”

The gaps she mentioned will be fully addressed through also the operationalization of the National HIV/AIDS fund, established through the ACT of Parliament, The GAC ACT 2016; ACT 938. Government through the Attorney General and with GAC has ensured a speedy development of the legislative instrument required to regulate essential provisions in ACT 938. It is expected she mentioned, that these regulations will be passed by the current session parliament to usher in the operationalization of the National HIV/AIDS FUND to ensure a constant flow of domestic funding for the HIV and AIDS response Programs.

She called on well-endowed state enterprises, the private sector, philanthropies and well-meaning Ghanaians to joins forces with the government in resourcing and sustaining the National HIV/AIDS fund once it becomes operationalized.

Those were the days and we'll do it our way yes our way. Make our dreams come true for me.